A success story of McDonald's and Indian Entreprenures

McDonald's a truly global company established its first restaurant in 13th October 1996 at Basant lok, New Delhi. Keeping in mind the cultural sensitivity in India, McDonald's changed its complete manu. It was McDonald's first experience to serve vegetarian Burgers rather than serving Beef and pork items.

McDonald’s team in India did many years of extensive research in India before launching their product in the Indian market and they found many critical issues to look after. Some of the major issues were like lack of proper cold storage, standardized suppliers, price sensitivity of Indian customers, underdeveloped logistics. All credit goes to McDonalds research team that they were successful enough to build strong strategies. As a resultant they developed a very strong and efficient supply chain for their restaurants in India. They pioneered the development of cold storage chain in India.

McDonald's encouraged many large as well as small scale entrepreneurs in India. Amrit Food, Mrs. Bectors Food Specialties Ltd, Schreiber Dynamix Dairies Ltd, Vista Processed Foods, Meena Agriculture Farms, Agro farms (Now, Green Earth Fresh Produce) are the distinctive sourcing for McDonalds. Schrieber Dynamix Dairies is a Joint Venture between Schreiber Foods USA (51%) and K.M. Goenka group (49%) and Vista Processed Foods is a Joint Venture between OSI Industries (USA) which is one of its largest suppliers for the chicken range of products across the globe since 2001.

McDonald's have helped their suppliers to achieve the desired quality standards by providing them effecient guidance and have also provided technical assistance. Agriculture technologies were also introduced for the year round cultivation of Iceberg Lettuce in India. McDonalds have completely outsourced the Logistics and ware house storage to Radhakrishna Foodland. Some of the critical aspect for McDonald's supply chain were on time delivery of the ingredients to the restaurants, forecasting the demand and procurement thereafter, maintaining a healthy relationship between buyers and sellers, cost effectiveness, cold storage chain right from indirect suppliers to the restaurants to maintain the quality and freshness, customer service. 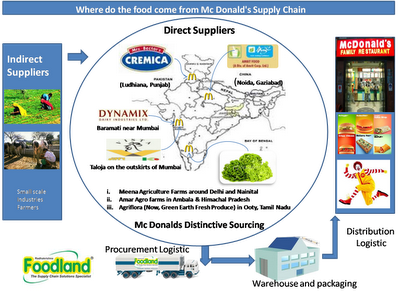 Posted by meghashree mohan at 9:44 AM 2 comments: 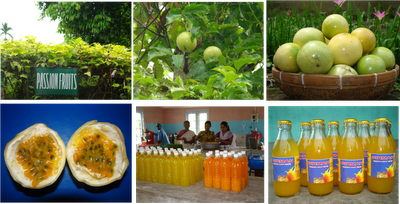 Passion Fruit ( Passiflora edulis) It is a vine which grows very well in the soil of Assam.Its immence flavour has made it very popular all over the world.There are two types of Passion fruit available one is yellow and the other one is purble in color.Both the varieties of Passion fruit grows very well in the easten part of Assam like Karbi Anglong, Golaghat etc.The extract from passion fruit is used to flavour many food items like Juice, icecream, cakes.

Food processing unit SIRMAN supported by State Agriculture Department situated in the Karbi Anglong District Assam is successful enough in extracting the juice from the passion fruit and at the same time the product is very well marketed by the Marketing Department under Karbi Anglong State Agriculture Department.Despite having great market potential of passion fruit juice in India as well as abroad, farmers in Assam are reluctant to cultivate the crop due to ignorance, lack of guidance and insuffecient supply chain management to the processing unit.An initiative in such direction will certainly lead to success.
Another most potential product will be Ghost Chilli. In 2007, Guinness World Records certified the Bhut Jolokia as the world's hottest chili pepper, 400 times hotter than Tabasco sauce. The pepper is also known as Naga Jolokia (in Nagaland), Bhoot Jolokia (in Assam) ghost pepper, ghost chili pepper, and ghost chili etc.The Ghost pepper is cultivated in  Nagaland and Assam region of northeastern India and parts of neighbouring Bangladesh.It can also be found in rural Sri Lanka where it is known as Nai Mirris (cobra chili).Ghost chilli grows very well in the North Eastern part of our country.
Posted by meghashree mohan at 2:41 AM 1 comment:

Gardening a booming business in cities 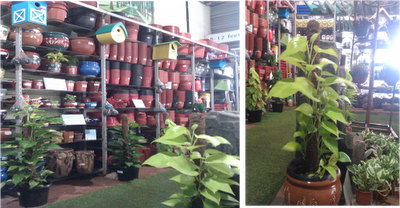 Space is the major concern for people living in big cities.Constructors make sure that each and every corner is utilized properly for housing but high rise buildings and space restrictions have taken away the garden from the houses, maintaining a terrace garden and a balcony garden with whatever area you have is the best solution to connect with nature and stay healthy too.

Gardening even in small spaces involves proper technique,designing and layout so that each and every space is utilized upto maximum.There are various prerequisites before developing a terrace gardening for example it must be strong enough to support heavy weight and leckage proof etc.
Posted by meghashree mohan at 10:58 AM No comments: 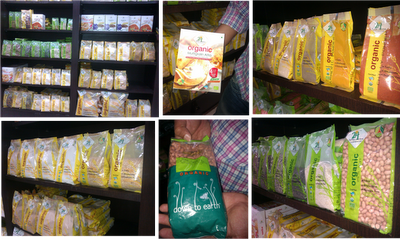 Data and Research reveals that residues of most chemicals pass through the food chain and settle down in the human body causing most dangerous diseases and abnormalities to man kind.But there is a way out to solve this problem “Go Organic”.

Organic cultivation means growing crops without the use of harmful synthetic chemicals, fertilizers and other artificial treatments.According to the scientific report Organicaly cultivated crops are more in nutritive value than the conventional way of cultivation.

The concept of consuming organic food is getting more and more popular among Indians now a days since people are acquiring more awareness about the ill effect of synthetic chemicals to their health as well as to the environment.Even T.V programmes like Satyamav Jayate in Starplus has also contributed to the awareness of the issue.

Scope of exotic vegetables in India 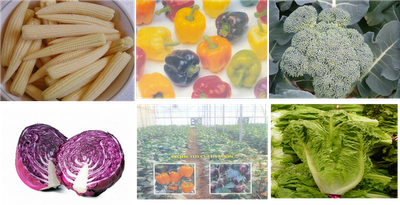 Globalization has brought many opportunities and changes in developing country like India. Some of the major changes along with the globalization are the changes in the living standards and living style among Indian people. The most visible change which we can notice is the change is the food habits among the new generations.

Now the question lies, Can these vegetables grow in India? Some parts in India have a great potential to cultivate these exotic vegetables. Baby corn cultivation has gained popularity as valued vegetable in Delhi, U.P, Haryana, Maharashtra, Karnataka, A.P and Meghalaya.

Cost of production in high technology Green house will lead to again high cost of cultivation, low cost polyhouse can be a suitable alternative of it. These vegetables are highly susceptible to diseases and pest hence they needs immense care while cultivation.

One of the critical challenge among the exotic vegetable cultivator will be the postharvest handling since these crops are climacteric in nature and are highly sensitive to change in temperature they need proper cold storage chain till point of sales to the end consumer. Establishing post harvest units and canning these vegetables before transportation to far places may be the solution.
Posted by meghashree mohan at 1:17 AM 16 comments: